White lupin stands out in the vast and polymorphous genus Lupinus L. for small variation of morphological characters. However, it has wide intraspecific variability in physiological plant properties: duration of vernalization time and growth rate, photoperiodic sensitivity, shape tolerance, drought resistance, cold- and winter-hardiness. There are winter and spring forms of white lupin. Besides, the lupin collection contains wild, undomesticated and local forms, modern improved cultivars and wide diversity of other genetic resources.

Libkind (1931) classified gene pools of white lupin into two geographic groups: Mediterranean and Abyssinian. According to her, the Mediterranean group is characterized by lighter colouring of the corolla, large pods and seeds, and plants shaped like a sprawling scrub. It is widespread over all the Mediterranean region. The Abyssinian group has darker colouring of the corolla, and small-sized pods and seeds. The shape of plants is oblate or umbelliform. The area of this geographic group is Abyssinia, with rare occurrence in Egypt.

Further analysis of the lupin collection in the VIR network enabled Fedotov (1948) to arrange the accessions into six main types characterized by different physiological and morphological characters: Georgian (winter), Southwest (Algerian), Abyssinian, West-European (Swiss), Middle-European (German) and Palestinian types. This classification encompasses and characterizes the majority of the white lupin forms having been available in the collection of VIR for 50 years. Up to the present, however, the collection has been abundantly replenished with numerous new accessions from various countries. As a result of their long-term analysis in different zones, many new data have been accumulated. In the outcome of this research, new eco-geographic classification of L. albus has been developed. 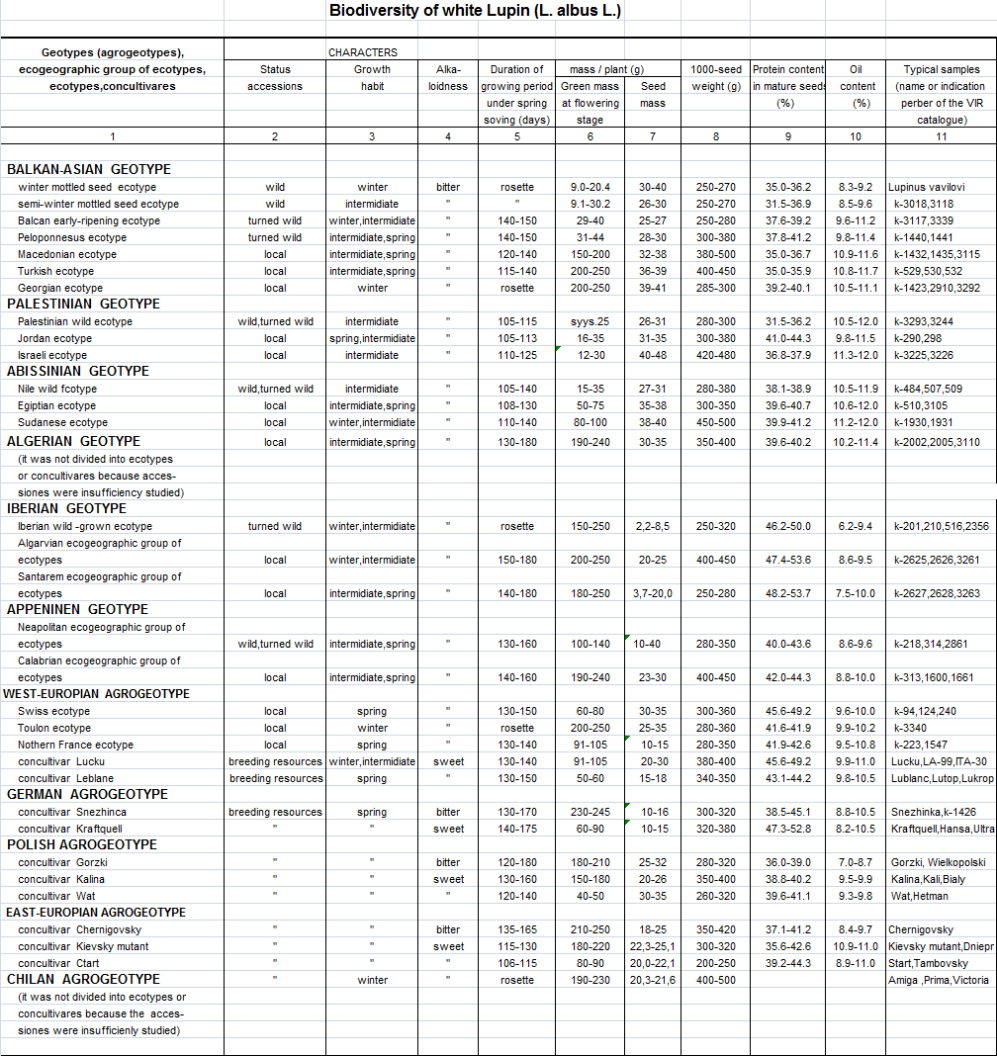 We have grouped the gene pool of white lupin available now in the VIR collection into 11 geotypes and agro-geotypes, 4 eco-geographic groups of ecotypes, 17 separate ecotypes and 10 concultivars. Eco-geographic research has shown the ranges of changeability in different descriptors of white lupin forms. Duration of growing period in spring plantings varies from 106 to 180 days, seed mass per plant from 2.2 to 40 g, green matter yield per plant from 9 to 250 g, protein content in seed from 35.0 to 53.7%, and oil content from 6.2 to 12.0%. The full description of each of resulted in the table ecotypes, genotypes and concultivares are published  (Kurlovich, 2002),  and Online here.