Narrow-leafed lupin is characterized by broad polymorphism in both morphological and physiological characters. It is widespread over all Mediterranean regions as wild plant, and is cultivated in Australia, Europe and North America. Variability of characters depends on eco-geographic conditions of their growing and on the degree of domestication. Wild forms are, as a rule, smaller, with narrow leaflets and pods, and small-sized seeds. Such forms basically occur on inshore sands and in the mountains, on unbroken soils. There are also macro-seeded and wide-leafed plants that grow predominantly close to arable lands. This circumstance evokes the supposition that such forms had once been cultivated in the field and afterwards returned to wild-growing state. Micolajczyk (1963, 1966) remarked that the plants of wild types with sluggish initial growth, narrow leaflets and small-sized seed are more adapted to severe conditions of growing, including frost and drought. Macro-seeded and wide-leafed forms with fast initial growth have more advantages on fertile soils and are good for cultivation under agricultural conditions. Probably such forms were the first to be selected and introduced into culture. Linnaeus described this species using numerous domesticated examples.

Macro- and microspermic plants and the forms with broad and narrow leaflets occur over all the Mediterranean. Besides, no wide gap was observed between cultivated and wild forms. In view of this, there is no reason to insist on the existence of two species: L. linifolius Roth. and L. opsianthus Atab. et Maiss., and two subspecies: subsp. angustifolius and subsp. reticulatus (Desv.) Franco et Silva, which have been set apart only because they have different width of leaflets and size of seeds (quantitative characters).

We suppose that it would be more correct to subdivide this species into varieties, subvarieties and forms on the basis of morphological variation, and into geotypes, ecotypes, eco-geographic groups of ecotypes and concultivars on the basis of physiological, biochemical, economic and other parameters, similar to white lupin. This approach provided us with a possibility to identify a series of similar ecotypes within the limits of different geotypes, where variations had definite geographic regularities. 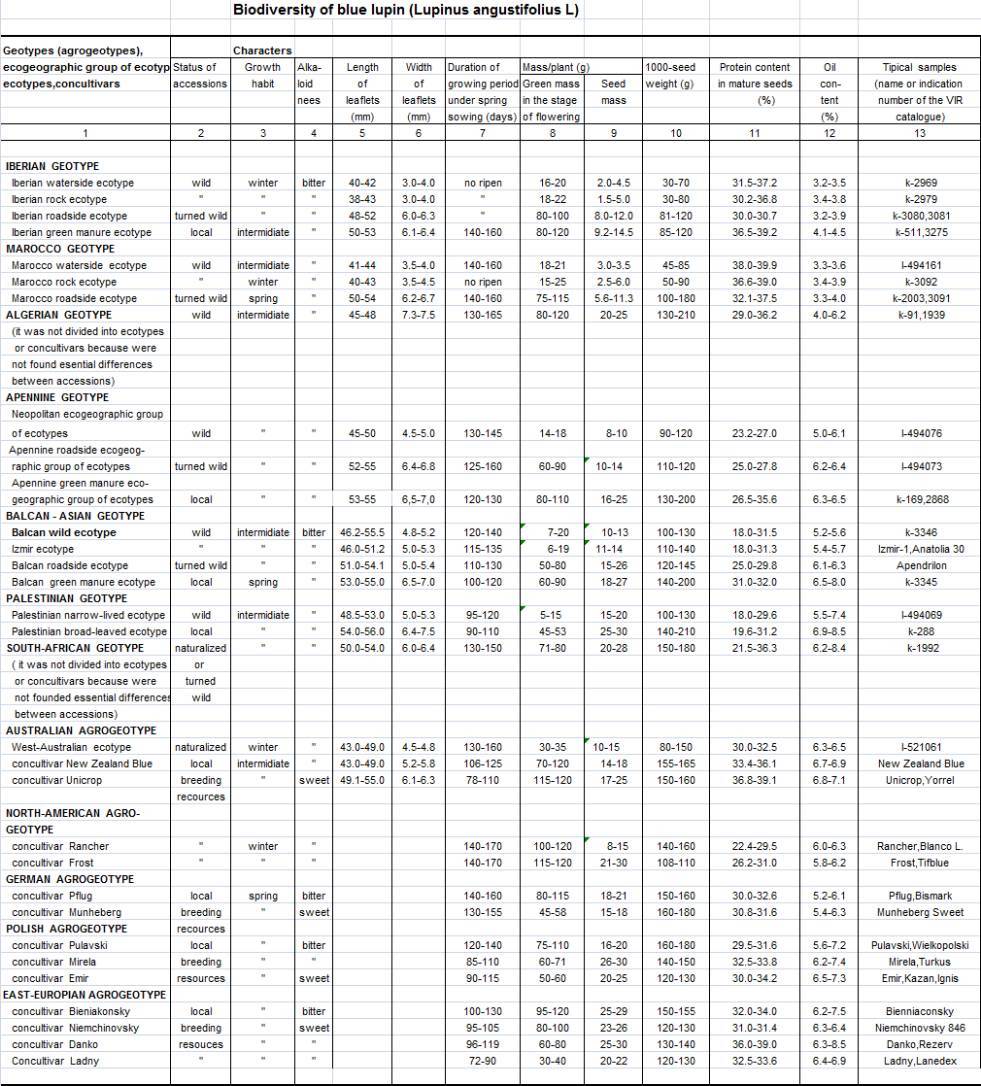 The diversity of narrow-leafed lupin is grouped into 12 geotypes and agro-geotypes, 16 separate ecotypes, 3 eco-geographic groups of ecotypes, and 13 concultivars. The full description of each of resulted in the table ecotypes, genotypes and concultivares are published  (Kurlovich, 2002),  and Online here.